Youngest Pilot To Fly Around The World - Matt Guthmiller

1 Matt Guthmiller, Youngest Pilot To Fly Around The World 6:04 AM

Youngest Pilot To Fly Around The World - Matt Guthmiller 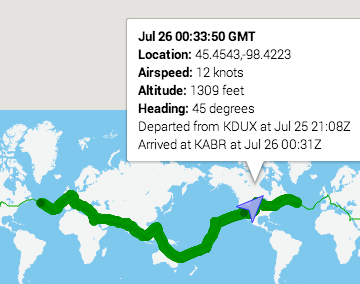 Teen completes world record-setting solo flight around the world. MIT freshman Matt Guthmiller becomes the youngest person ever to circumnavigate the globe on a solo flight. This is no run-of-the-mill Facebook status update.

Guthmiller, of Aberdeen, S.D., flew a six-seat 1981 Beechcraft A36 Bonanza about 27,000 miles over 44 days and roughly 170 hours total in the air. He removed two of the seats to make room for additional fuel tanks. The last leg of the trip — from Honolulu to El Cajon, Calif., outside San Diego — took 15 hours and 43 minutes.

Success: The 19-year-old student from South Dakota, left May 31 from Gillespie Field to circumnavigate the globe in a leased 1981 prop-powered, single-engine Beechcraft Bonanza A36

His love of flying dates back to the days he logged hundreds of hours on flight simulator games as a child.

Matt Said "My real goal is to inspire other young people to attempt things of a similar magnitude. That's what I hope to accomplish with this flight."

Matt made 25 stops in 14 different countries across five continents during his journey, including London in the UK, Rome in Italy, Athens in Greece, Cairo in Egypt and Bangkok in Thailand.

Matt documented his adventure through Limitless Horizons, a non-profit fundraiser.

Matt Published On His Website During The Journey "Nothing is impossible."